The next recorded explorer was botanist George Caley who, in 1805, set out from John Macarthur's farm at West Pennant Hills. Caley was impressed by the stands of blackbutt and blue gums at Gordon and Pymble.

Settlers
The first European to live in the vicinity of the park is probably William Henry, who took possession of land north of Blue Gum Creek, some seven kilometres from the river mouth, in 1807. He lived on Millwood farm from 1814 to 1850, in what is now Fuller picnic area.

Many timber-getters were attracted to the area and began illegal operations in the 1820s. The sawyers camped out, living on salt beef and damper, felled the forest giants and dug great saw pits.

Joseph Fidden's grant, dated 5 April 1821, was on the south side of Fiddens Wharf Road. Bullock drays and jinkers carried logs along the ridge towards the city, turning off at Killara down Fiddens Wharf Road to reach the Lane Cove River.  The six and a half hectares around Fiddens wharf was declared a wharfage reserve from which no timber could legally be cut. This resulted in the preservation of the fine stand of blackbutt which now remains.

When the sawyers left, in came the orchardists. They put up huts, made their own furniture, bread and clothes. Five orchardists were located around the weir area. Fuller's orchard was downstream of the present bridge, on the eastern bank of the river. Jenkins was next upstream, and William Henry was the grandfather of Maria Jenkins, Thomas Jenkins' wife. The kitchen of Jenkins' house has survived and is located next to the visitor centre. The homestead was weatherboard with a shingle roof. It was damaged by fire in the 1920s and was demolished in the 1930s. Robert Baker's orchard is now The Pines picnic area while the kitchen on the hill above the flat forms part of the park depot.

The only surviving homestead is Schwartz's, a large weatherboard house with an iron roof and verandah on three sides.  George Baker and Hughes had holdings on the Ryde side of the River.

Thomas and Maria Jenkins had the largest property and the largest family (13). Their farm became popular with picnickers and the property was purchased for the inclusion into the national park in the 1930s.

Images from the internet:  Lane Cove River National Park, scenes at West Chatswood.  L:  Kookaburra; C: Riverside Falls; R: Eastern Rosella.
The image below shows the river winding through many northern suburbs and the Lane Cove River National Park before reaching its mouth between Greenwich Point and Woolwich where it merges with Parramatta River, soon thereafter becoming part of Port Jackson, so named by Captain James Cook in 1770. 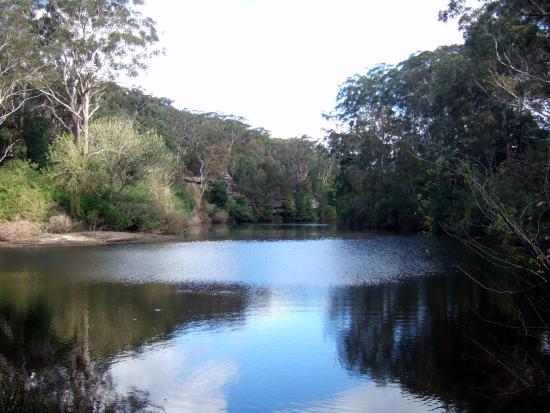