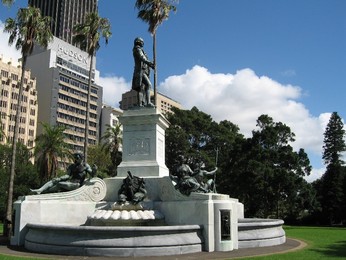 
Spring is a glorious time to visit Gardens and join a tour of this historic site.

First stop can be to view the Horses of the Desert Mounted Corps Memorial, located on the south-west external wall of the Royal Botanic Gardens – comprising a cast bronze wall plate depicting an Australian Light Horse Trooper with three horses.  The memorial honours the 140,000 horses that served in the WW1 Desert Campaign Sinai Desert and Palestine 1915 - 1918.  These gallant Waler Horses suffered wounds, thirst, hunger and weariness - almost beyond endurance. (The Waler is an Australian ﻿breed of riding horses that developed from the horses that were brought to the Australian colonies in the 19th century, named for their early breeding origins in New South Wales.)  Lamentably only one of their horses returned to Australia - very poignant as we honour the World War 1 anniversaries.

Next proceed to First Governor of NSW, Arthur Phillip’s impressive statue, which is impressively set upon a marble rectangular pedestal incorporating three bronze reliefs of Justice, Patriotism and Education, and flanked by reclining bronze figures of Neptune, Agriculture, Cyclops and Commerce.  Four marble consoles are embellished with bronze plaques of Aboriginal people; four giant clam shells are surmounted by four bronze prows of ships of his era.  The statue was erected in 1897 to celebrate the 60th year of the reign of Queen Victoria.

Follow with a ramble through the Gardens to view various highlights – the convict bricks in the delightful Fernery; the Macquarie Wall built by Governor Macquarie to enclose the Domain; the Botanic Gardens Creek, essential water for the First Fleeters and the First Farm which exhibits crops that the convicts grew on this site; through the shady Palm Grove; past the ancient Wollomi Pine – called the ‘Dinosaur tree’ or ‘living fossil’ and one of the greatest botanical discoveries of recent times.  We paused at the sculpture “The Wish”, before continuing onto First Encounters Garden which features plants that originally grew here, the traditional home of the Cadigal people. Complete the day with refreshments at the Gardens Café or picnic on the expansive lawns or under the canopy of spreading evergreen trees - a 64 hectare treasure trove right in the centre of Sydney’s CBD.