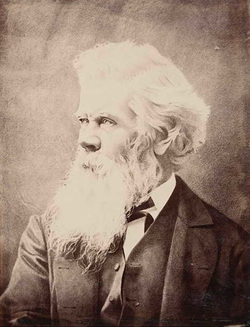 Sir Henry Parkes was born in Coventry, England in 1815.  He arrived in Australia on the Strathfieldsaye in 1839, and died at Annandale in Sydney in 1896.  He was married three times and, by two of his wives, had seventeen children (of whom five died under three years of age).

In England, Sir Henry Parkes had a hard life as a child and young adult.  He had little schooling and worked on a ropewalk, in a brickyard breaking stone and digging clay, as a bone and ivory turner apprentice, and as a member of a political union.  During this time he was focussed on steadily educating himself.

On arrival in Australia Sir Henry worked hard in low paid jobs.  In due course he was hired by the NSW Customs Dept. as a tide waiter.  With this steady job he had time to write poetry and prose (notably “Stolen Moments”, published by subscription within three years of arriving in Australia).  Regarding matters to do with the rum trade, he was one of Australia’s first whistle blowers.  In 1846 he left the Customs Dept. and worked in the private sector.  He worked as a wood turner and ivory and bone carver.  He had a shop in Hunter Street and next door to that shop set up a newspaper, “The Empire” (1850-1858), which attracted the readership of the common man.  In 1848 he was Secretary for a political campaign against transportation.  He studied law.  He was constantly burdened with debts.

In 1854 Sir Henry Parkes stood for the Legislative Assembly (seat of City of Sydney).  His political career moved on from there, and in 1872 he became the Colonial Secretary.  He was the NSW Premier on 5 occasions between 1872 and 1891.  He contributed to positive developments in many areas, including public education, nursing, and railways.

With health and personal traumas, Sir Henry retired.  He died five years before Australia became a Federation.  A statue of Sir Henry Parkes was erected in the Centennial Park in 1897.

As presented to Chapter Meeting by:  Ian Thom, the great-great-grandson of Sir Henry Parkes GCMG