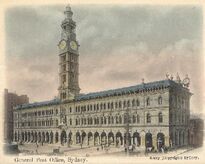 
For 21 years after settlement, New South Wales had no official postal system.  On 25 April 1809 Colonel William Paterson, then Lieutenant-Governor of the colony, issued the order:

"Complaints having been made to the Lieutenant-Governor that numerous frauds had been committed by individuals repairing on board ships on their arrival at this port and impersonating others, by which they have obtained possession of letters and parcels … The Lieutenant-Governor has been pleased to establish an office at which all parcels and letters addressed to the inhabitants of this colony shall be deposited previous to their distribution, which office shall be under the direction of Mr Issac Nichols, assistant to the naval officer.”

Nichols had arrived in the colony as a convict in October 1791, having been sentenced to seven years for stealing.  In 1799 on a split verdict of four-three, Nichols was found guilty in a criminal court of receiving stolen property.   Governor Hunter held him in high opinion, describing him as "a “most exemplary character”, and wrote of his “utmost assiduity, most conspicuous diligence and … unwearied attention.”  Hunter referred the trial papers to London and eventually Nichols was given a free pardon.

On the arrival of a ship in the harbour, Nichols or his deputy was authorised to go on board, collect all mail, and issue a receipt for it.  Nichol’s house became the office for its reception and distribution.  He was authorised to charge a shilling for each letter and 2/6d for each parcel collected, except for letters to soldiers of the New South Wales Corps, who were to be charge only a penny each.  The Sydney Gazette then published the names of recipients of mail advising mail was awaiting pick-up.

Governor Macquarie also held Nichols in high regard - in 1810 Nichols was authorised to handle local as well as overseas mail.  This effectively made Nichols the colony’s first postmaster, a position he retained until his death in 1819.

Images:  From the internet, (L) George Street North in 1829, sketched from roadway opposite the Commissariat Stores.
​​© Arthur Phillip Chapter of Fellowship of First Fleeters 2019-