The historic voyage from England began in fine weather which continued for several weeks.  However as they sailed through the tropics, the weather became increasingly hot and humid. Tropical rainstorms meant that the convicts could not exercise on deck as they had no change of clothes and no method of drying wet clothing. In the doldrums, Phillip was forced to ration the water to three pints a day.  After a short stay at Santa Cruz at Tenerife to take on fresh water, vegetables and meat, they set sail across the Atlantic to Rio de Janeiro, in Brazil, taking advantage of favourable trade winds and ocean currents.

On reaching Rio de Janeiro, Captain Arthur Phillip ordered the ships to be cleaned, water taken on board, repairs to be made; large quantities of food were requisitioned.  After a month-long stay, the Fleet left Rio de Janeiro and ran before the prevailing westerly winds to the Cape of Good Hope in southern Africa where they again took on stores.

On their departure they sailed into fierce storms, unusually frigid weather and constant dangers, sailing an almost uncharted route across the southern Atlantic, the Indian Ocean and the Southern Oceans – really nasty weather until they arrived at Botany Bay in 1788.

Scientists have been studying the history of weather conditions because of its link to climate change, in particular the weather experienced by the convicts, sailors, soldiers and civilians during the long voyage of the eleven ships of the First Fleet.

A great source has been the weather logs kept by young marine William Bradley on the gun ship HMS Sirius, who was 1st Lieutenant to Captain-General Arthur Phillip.  Bradley kept a daily log which included temperature, barometric pressure and winds, and some of the earliest observations of southern hemisphere weather.

The voyage was an ordeal – tempests in the Roaring 40s ripped into the ships’ sails; people shivered in the cold even though it was summer – in fact they saw snow on the east coast of Tasmania.  Bradley recorded a big storm and huge swells on New Year’s Day 1788.  People prayed as the Fleet was hammered by severe winds along the east coast, but every ship entered Botany Bay safely.  The Fleet was delayed for two days before they could relocate to Port Jackson to the north, battling strong headwinds and big seas before sailing into Port Jackson which Phillip described as "the finest harbour in the world, in which a thousand sail of the line may ride in the most perfect security ..."

This was one of the world's greatest sea voyages – eleven vessels carrying nearly 1500 people and stores had travelled for 252 days for more than 15,000 miles (24,000 km) without losing a ship – and through every extreme of weather.

The Cadigal people tell stories about violent storms playing a part in the formation of the landscape.  The word Tamarama, the name given to a Sydney suburb, is a Cadigal word for thunderclap, most likely a reference to stormy weather, in sea and sky.

Soon after arrival in 1788, the fleet was threatened by wild winds that nearly drove them on to rocks.  Several officers also noted the terrible thunderstorms that struck the Harbour settlement. In February 1788, Lt Ralph Clark wrote in his journal that above all the Places in the world this is the most terrible for thunder and lightening (sic) - there has not a day gone over our heads but there has been Seveer (sic) thunder and Lightning.

Records of the first settlers have revealed that the first years of European settlement were wetter than usual.  Scientists have discovered that 1788 was a La Nina year, when the east coast of Australia experienced unusually higher rainfall.

Officers of the First Fleet, 1st Lt William Bradley and Marine 2nd Lt William Dawes, recorded that temperatures were cool throughout 1788. Rain and storms made the establishment of the camp very difficult. Lt Clark noted: “Thursday 31 January—what a terrible night it was … thunder, lightning and rain.” Further storms disrupted the disembarkation of the convict women on February 6, who were landed during an intense summer storm: “They had not been landed more than an hour … but there came on the most violent storm of lightening and rain I ever saw. The lightening was incessant during the whole night and I never heard it rain faster.”

March of 1788 was very wet;  July experienced a 40-hour-long gale that produced huge seas and the bad weather continued battering the settlement until August.  Marine officer Watkin Tench recorded that in July and August the settlement experienced more inclement tempestuous weather than had bee observed of any former period of equal duration.  Lt Collins wrote:  During the beginning of August much heavy rain fell, and not only prevented the carrying on of labour, but rendered the work of much time fruitless by its effects … It was not until the 14th of the month, when the weather cleared up, that the people were again able to work.  The persistent inclement weather made life unpleasant and caused frustrating delays to the development of the settlement.

The summer of 1789 brought the first onset of really hot weather; the hottest day (41.4°C) was recorded on December 25, 1789, heralding a short period of intense heat. It was not until the summer of 1790–1791 that consistently high temperatures in the thirties and low forties (°C) was experienced at Sydney Cove. During 1791 the weather moved into an El Niño phase, hot, dry weather bringing on water shortages and crop failure which stymied the development of the settlement after the arrival of the Second Fleet.

In April 1793, it was reported that: “the rain … came too late to save the Indian corn of the season ...”  By August 1793: “much apprehension was entertained for the wheat, which began to look yellow and parched for want of rain.”  However, from August 1794 conditions in the settlement gradually improved, and there were signs that the drought was beginning to break.  Agriculture was beginning to thrive as heavy rains soaked the floodplains of the Hawkesbury River.

The first major drought experienced from 1790 by the early settlers finally come to an end in 1794, a forewarning of the aridity of the continent and the environmental challenges that have been an integral part of colonial settlement and the economy of Australia.
The cycle of drought, storms and flooding rains continue to strike Sydney and beyond, causing damage to buildings, destroying crops, and loss of life when sailing ships were dashed by violent wind and waves on to coastal cliff faces and rocky shorelines.

THE SOUTHERLY BUSTER - “A BURST OF FRESH AIR”
After the long hot summer days the people of Sydney greeted the arrival of the southerly buster with a sigh of relief.  During the earliest days of the colony, Sydney's summer storms were accompanied by billowing red dust from the settlement's open brickworks.

Its arrival has always been notoriously difficult to predict, though meteorologists today have the benefit of satellite imagery and weather-watch radar.  From early on, the signal warning that a buster was on its way was a flag was flown at Observatory Hill with the letters ‘JB’ printed in white on a blue background. The letters indicated that a southerly blow had reached Jervis Bay.

A raffish irreverence about southerly busters has broad appeal, which Ruth Park captures this feeling perfectly in her novel Poor Man's Orange (1949):

After an unbearably hot day, the old men on the balconies were sniffing the air and saying, 'Here she comes!' The Southerly Buster, the
genie of Sydney, flapped its coarse wing over the city ... The women undid the fronts of their frocks and the little children lifted up their
shirts and let it blow on their sweaty bottoms.

Some cold beer, a few old friends in the afternoon, a Southerly Buster at dusk – one can imagine friends happily raising their glasses and joining in a toast to the southerly, as proposed by poet Henry Lawson:

Our own wind and only, from seas wild and lonely -
Old Southerly Buster! - To you!

In 1879, George Herbert Gibson, who wrote humorous verse under the pen-name ‘Ironbark’, published a book called Southerly Busters. The humerous cartoon below shows a buster wreaking havoc near Hyde Park. Inverted umbrellas are clutched in the hands of startled ladies, hats bowl down Macquarie Street and a judge's wig is in full flight. Only Queen Victoria's beloved Prince Albert stands unruffled on his plinth. 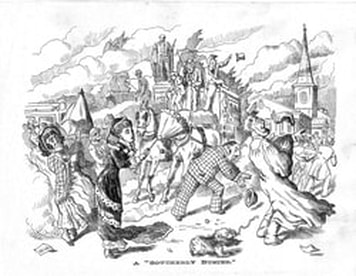