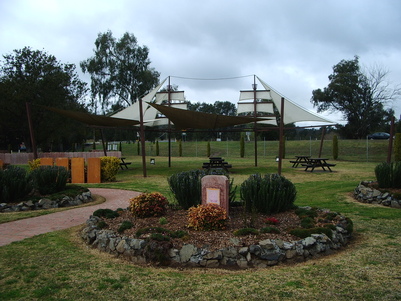 ​THIS PARK WAS THE FIRST TO BE CREATED IN HONOUR OF ADMIRAL ARTHUR PHILLIP, FIRST GOVERNOR OF NSW

The First and Second Fleet Memorial is a memorial garden  to the First and Second Fleets in Australia. Carved by stone mason, Ray Collins, the names of all those who came out to Australia on these epic journeys are found on tablets along the garden pathway. The stories of those who arrived on the ships, their life, and first encounters with the Australian country are presented throughout the Garden.

The memorial lies on the banks of Quirindi Creek, the perfect location to stop, take a break, picnic and be inspired while learning more about the history of Australia.

On Saturday 31st August 2014, Arthur Phillip Chapter of the First Fleeters Fellowship, took part in an excursion to Wallabadah First Fleet Park. This event was organised by the Liverpool Plains Council in honour of the first Governor of Australia, Admiral Arthur Phillip.

Twenty four of our members attended this event, including some side excursions to points of interest in Scone, Murrurundi, Quirindi and Nundle, over the preceding days. The day was fine and sunny, and the park welcomed many a local chapter of the Fellowship and descendants of the First Fleet pioneers, either convicts or crew.  Over the stalls selling coffee and cake, advertising the Fellowship, playing bush music and selling souvenirs, many a story was exchanged of First Fleet ancestors. Second Fleet ancestors were honoured also, by additional headstones and gardens to those of the original 11 First Fleet ship’s headstones in the park.

Liverpool Plains Shire Mayor, Councillor Ian Lobsey, himself a First Fleet descendent welcomed participants. History Lecturer at New England University, Dr Stephen Cunneen, gave a detailed account of Governor Phillip’s first year or two in the colony, entitled “Phillip, Leadership and 1790: the pivotal Year of Survival at Sydney Cove” In this speech Arthur Phillip’s skills as a leader, his care for the wellbeing of convicts and crew in the First Fleet and after, his management of the food crises facing the colony, his humanitarianism towards the Eora people were outlined in the speech.

While our members retired for lunch at the Wallabadah hotel, “Marshall Macmahon”, the period dress prizes and the treasure hunt were held to finish the day of celebration of our First Fleeters and the leadership of Governor Arthur Phillip.